Sad photo of a young hawker forced to endure cold, hunger at night because he was allegedly warned by his aunt not return home until all the oranges are sold off 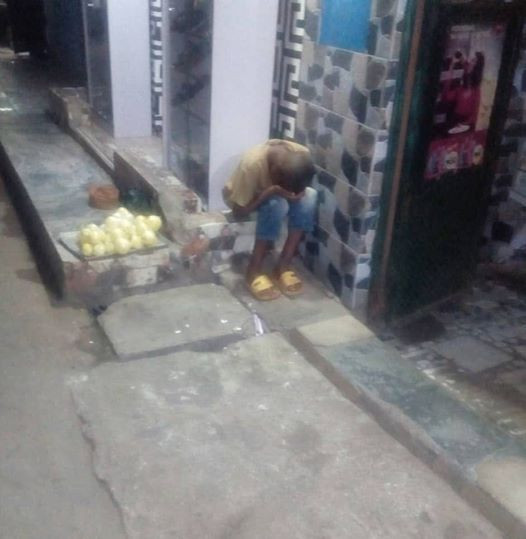 Miserable photograph of a youthful seller compelled to persevere through cool, hunger around evening time since he was purportedly cautioned by his auntie not come all the way back until every one of the oranges are auctions off

The little fellow was allegedly spotted by a Facebook client in Awka, Anambra state capital.

Peruse the report underneath:

“What an out of line world. This night as I was entering a well known restaurant to encourage the worms in my stomach, I observed this kid of ten years napping close to the oranges he sells. In the wake of taking this pic, I prodded him and when he came conscious, I started to pose inquiries. The rundown of what he said is this current: he’s from Abakaliki and lives with an auntie in Awka. He’s in grade school. He sells oranges which his auntie has announced that he should complete the process of selling or else he dare not come all the way back. In this way, even around evening time when he ought to be home resting, he’s still out and about attempting and planning to sell all he has on the plate. Today around evening time, he was worn out and shuddering in the harmattan cold. He along these lines chose to sleep, as envisioned, before proceeding to peddle. He disclosed to me his auntie abuses him as well. I thought of how to support him and chose to purchase every one of the oranges so as to liberate him. He needed to tail me to where I stopped to keep my oranges. In transit, it jumped out at me this was the means by which awful individuals could draw him to their place and slaughter him” 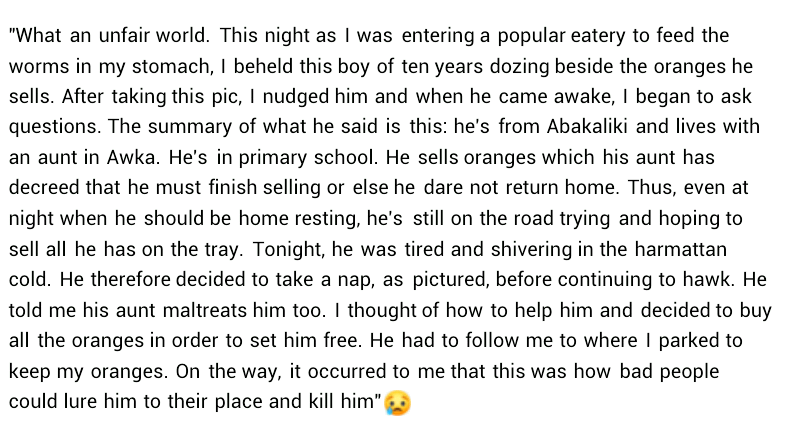